A Tetris-like strategy to create maximum value, livability, and community for mixed-use housing and office in Menlo Park.

Imagining a new way of delivering dense urban infill is tricky; creating an integrated project with two separate lots beholden to two sets of planning rules is even trickier. But combining four housing types for seventeen graciously-sized units, 25,420 rentable square feet of class-A office space, and an outdoor community space on a 30,000-square-foot site while maximizing the floor area ratio for each element? Now that sounds like fun!

The architects at brick love solving puzzles, especially in 3D, so we set out to design a perfect fit for this complex project using BIM modeling (and an affinity for Tetris). Now in construction, the 650 Live Oak project meets all these challenges and tops them off with dedicated green space and private entrances for the office building and for every unit, two of which are below market rate. 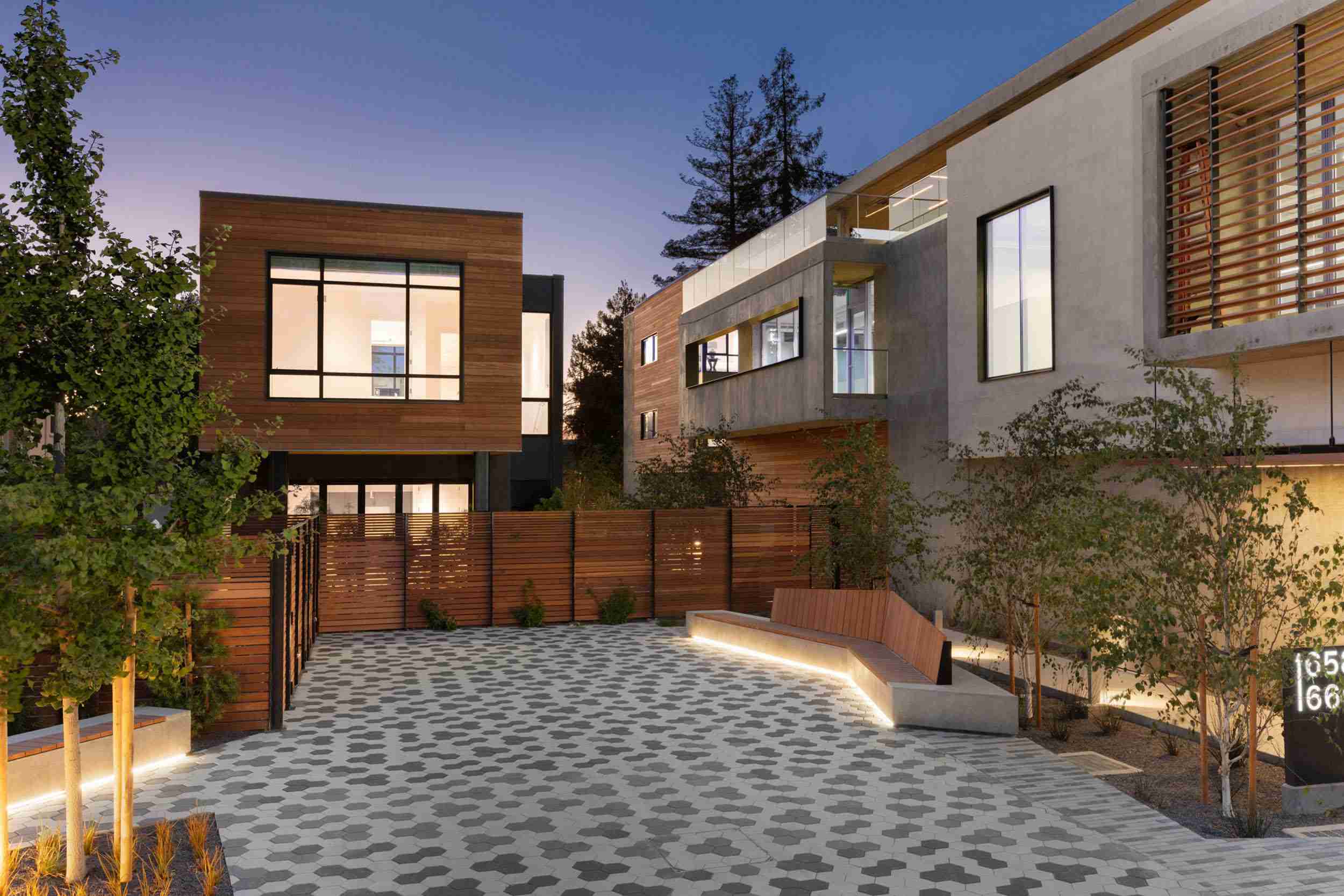 Making the most of the site – and the neighborhood.

Players of Tetris are obsessed with getting the pieces to fall into place, especially when there are bonus points to win. At 650 and 660 Live Oak, the City of Menlo Park made it possible to unlock bonus Floor Area Ratio (FAR) by finding ways to include a public benefit as part of the project. The site is close to CalTrain and retail, and shares the block with low-density residential and mixed-use buildings. What it lacked was open space, so the team initially focused on creating a community garden at the front of 660 Live Oak. Exploring further, the developer realized the best benefit the project could offer was additional below-market-rate(BMR) housing. Now, instead of a fraction of one unit, the project includes two BMR studio lofts and enjoys a .4 FAR bonus.

“What’s fascinating is that the open space lived on and became part of the vibe of the project, though it was not required for the public benefit bonus.” Rob Zirkle, Principal-in-Charge, recalls. Connecting the housing units to the street through a public open space “knitted the project into the community.” 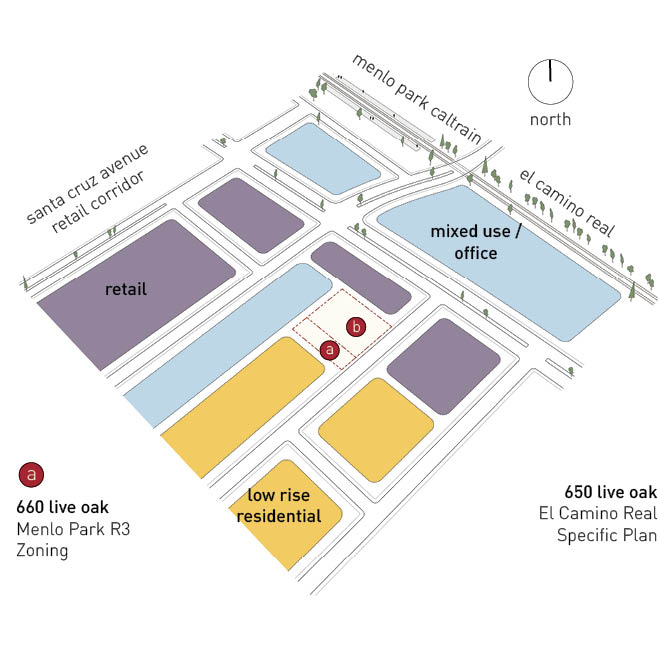 650 Live Oak is really two projects designed to integrate as one. 660 Live Oak’s rules are governed by R3 zoning, and restrict development to two single-family homes with a maximum .45 FAR. 650 Live Oak is within the El Camino Real Specific Plan Zoning, which allows mixed-use development at .75 FAR, not including the public benefit bonus. If the parcels were combined, the most restricted zoning would apply. Unlocking the public benefit bonus added .4 to the Floor-Area-Ratio, making it possible to design for maximum long-term value. 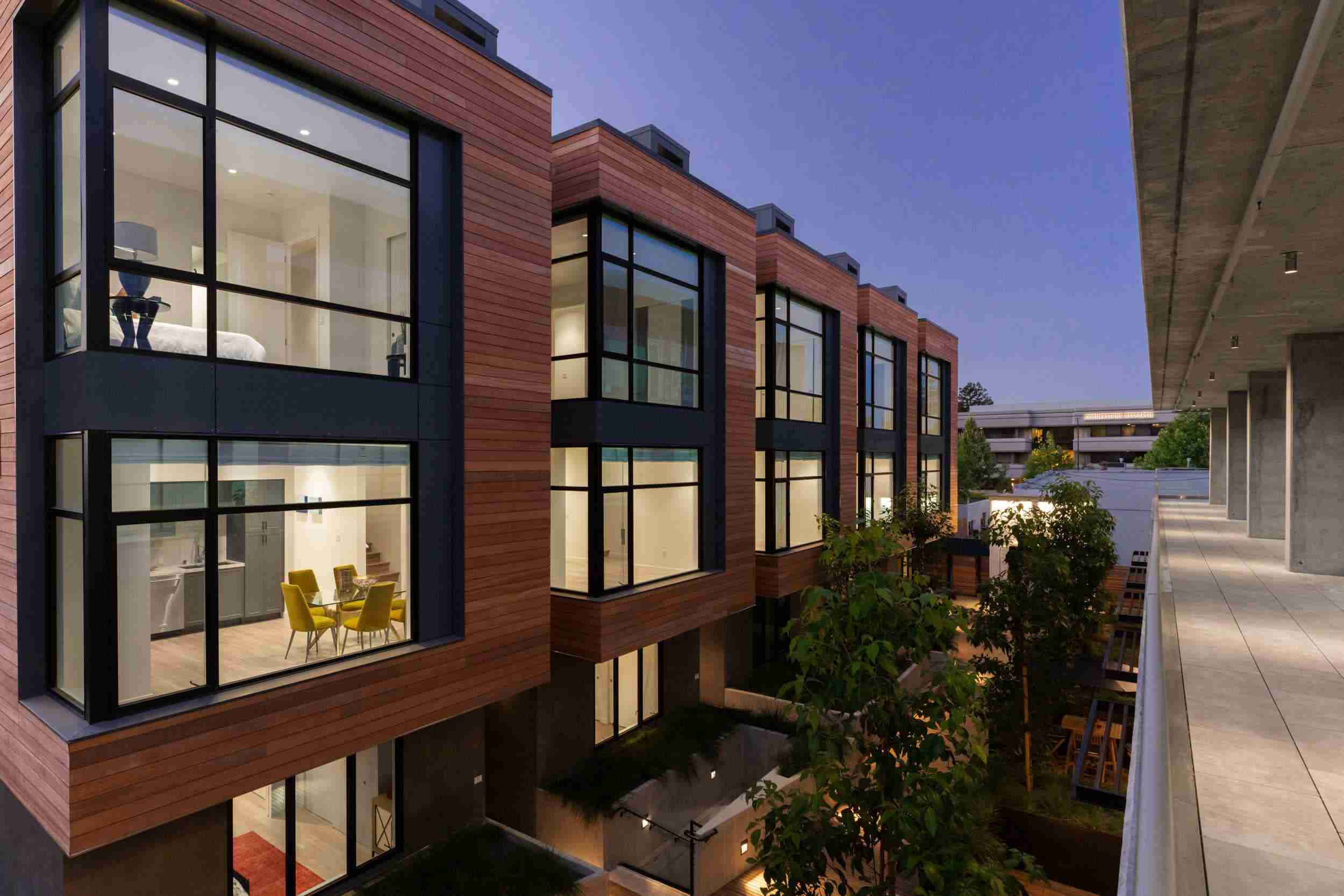 The project initially proposed a community garden and gathering place. While the bonus was achieved with an additional BMR lot, the open space remained as part of the project.

Designing a new page in the developers’ playbook.

For Zirkle, the 650 Live Oak project “couldn’t be more of an infill idea—creating a cool community with access to a pocket park, totally connected to the street and the city while also giving residents a bit of their own private universe.” For conventional developers, however, this idea isn’t usually in the play book. The most expedient, if lower return, option would be to sell the 660 parcel and develop an office building on 650, without regard for public benefit or making the most of available FAR. Housing, if any, might be an awkward add-on in the back of the building.

Working with developer Dan Minkoff and later John Fong, brick reconfigured the game with the aim of maximizing FAR for both housing and office wherever possible. For the office component, height was a more limiting factor than FAR. Building with concrete is slow going, but would allow for three floors and high ceilings worthy of Class A office space while making it possible to add ground-floor residential lofts that face a courtyard at the back of the building. Building most of the residential as individual, wood-frame buildings reduced costs, created separate entries for each dwelling, and removed the need for an additional elevator or exit stairs. Less cost for infrastructure made way for investment in terraces, roof decks, and more gracious living spaces. 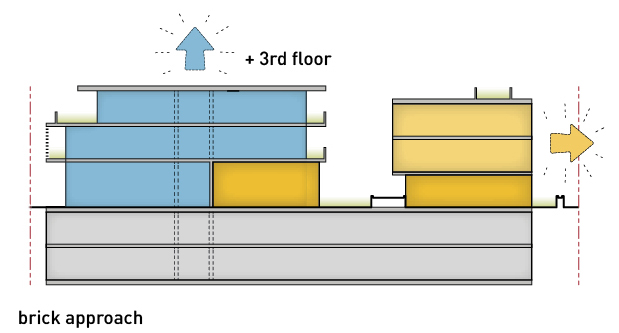 Taking Tetris to the next level.

When combined, 660 and 650 Live Oak equal about 30,000 square feet, a tight fit for such a complex program. Because of the restrictions on the 660 parcel, most of the project fits on just 23,000 square feet. Even more remarkable is the fact that each of the residential units has its own private entry and green space. Secure underground parking is provided for both the office and residential users. A centralized stair and elevator core is accessed by the main courtyard. Breaking up the housing into separate 3-story buildings allows for 2 story town homes with first-floor flats below. Tall windows that face a light-filled courtyard make the units feel open and spacious. 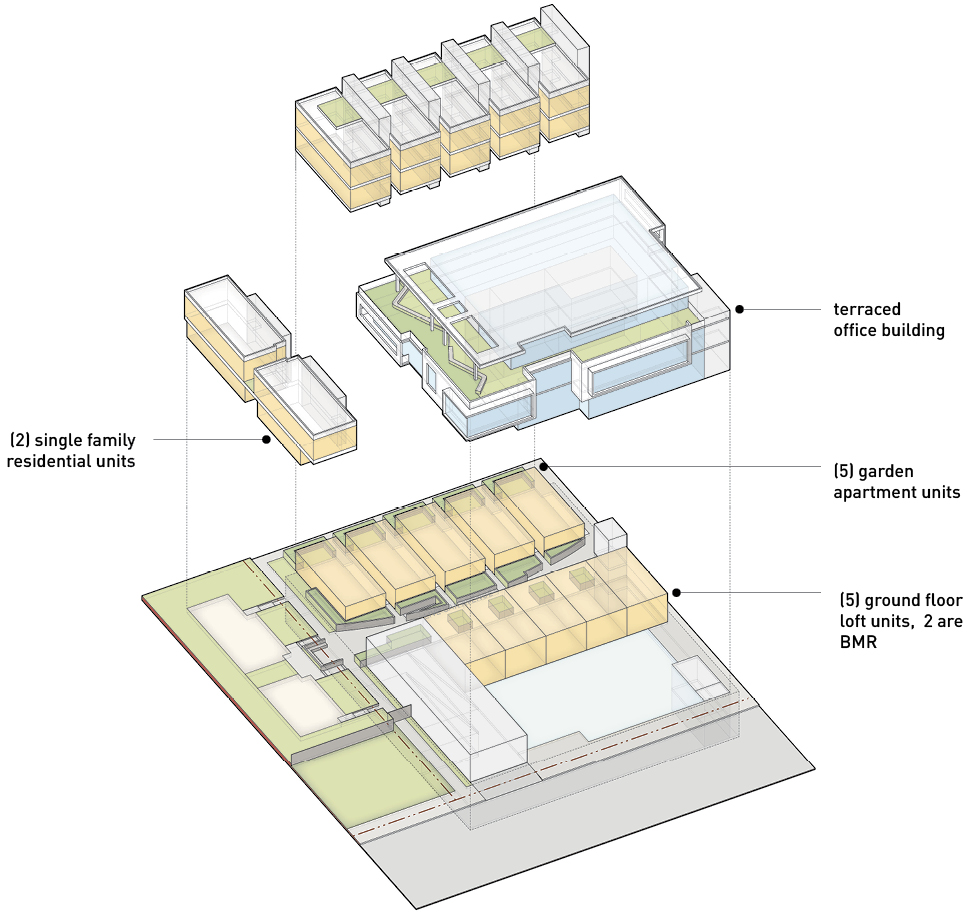 A short walk from Caltrain, downtown shops, and Trader Joe’s, 650 Live Oak is a great spot for residents and office workers alike. The project’s 25,420 rentable sf office building is designed to take advantage of Menlo Park’s mediterranean-style climate with terraces and sliding glass walls that bring the outside indoors. Screens and overhangs help control light and keep things cool in summer months—just a few of the many green building features that will earn a LEED Gold rating. As with most of brick’s projects, the office floor plates are designed to be reconfigurable for multiple tenants, with multiple points of access to light and fresh air so everyone has an excellent work day. 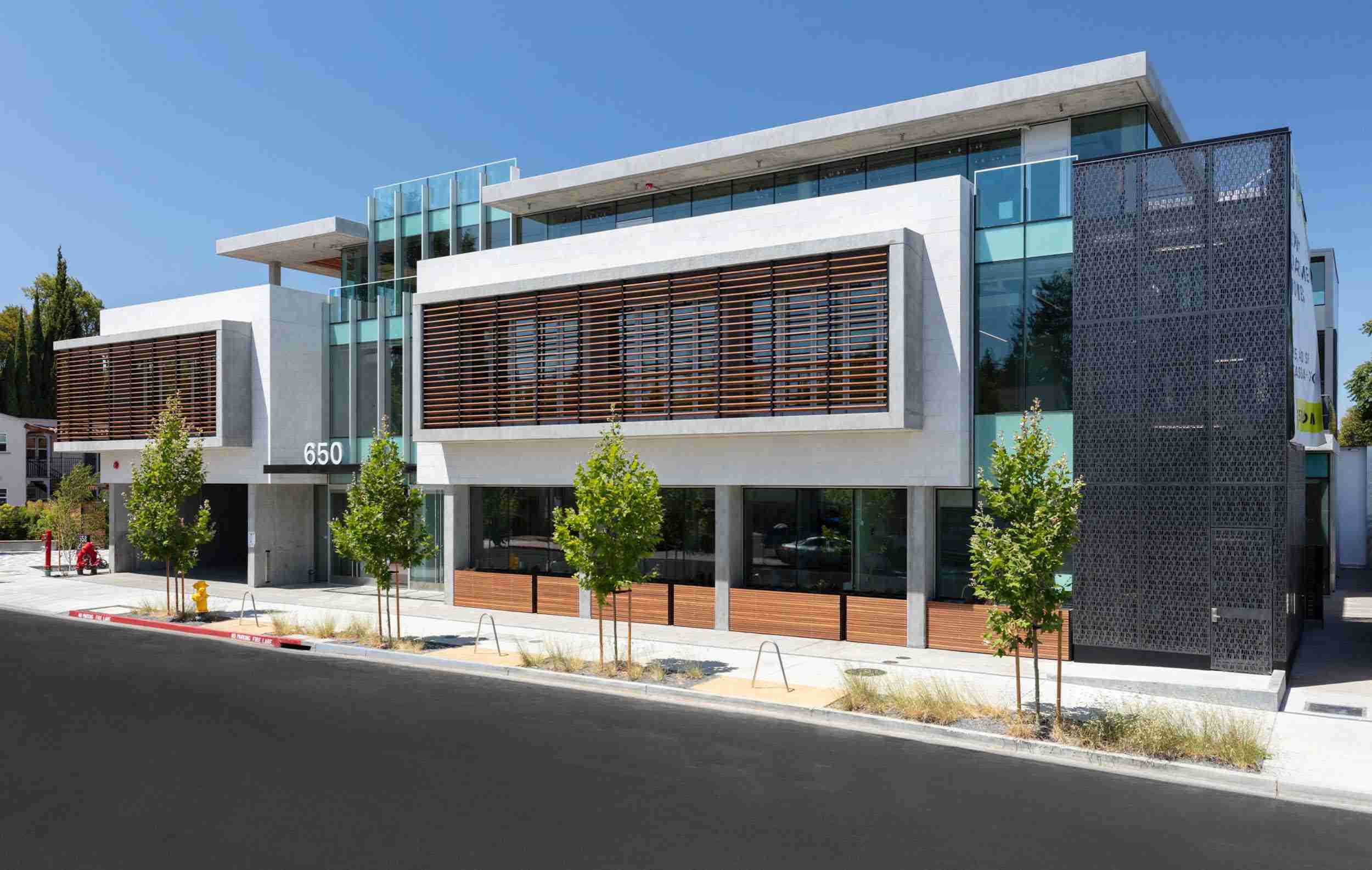 Removing the need for a hallway and exit stairs in a typical residential building allowed brick to design something that worked better for people. Balconies and outdoor spaces abound in the office building and residential units. Shared underground parking leading up to a central courtyard creates a vibrant community feel in this truly mixed-use project. 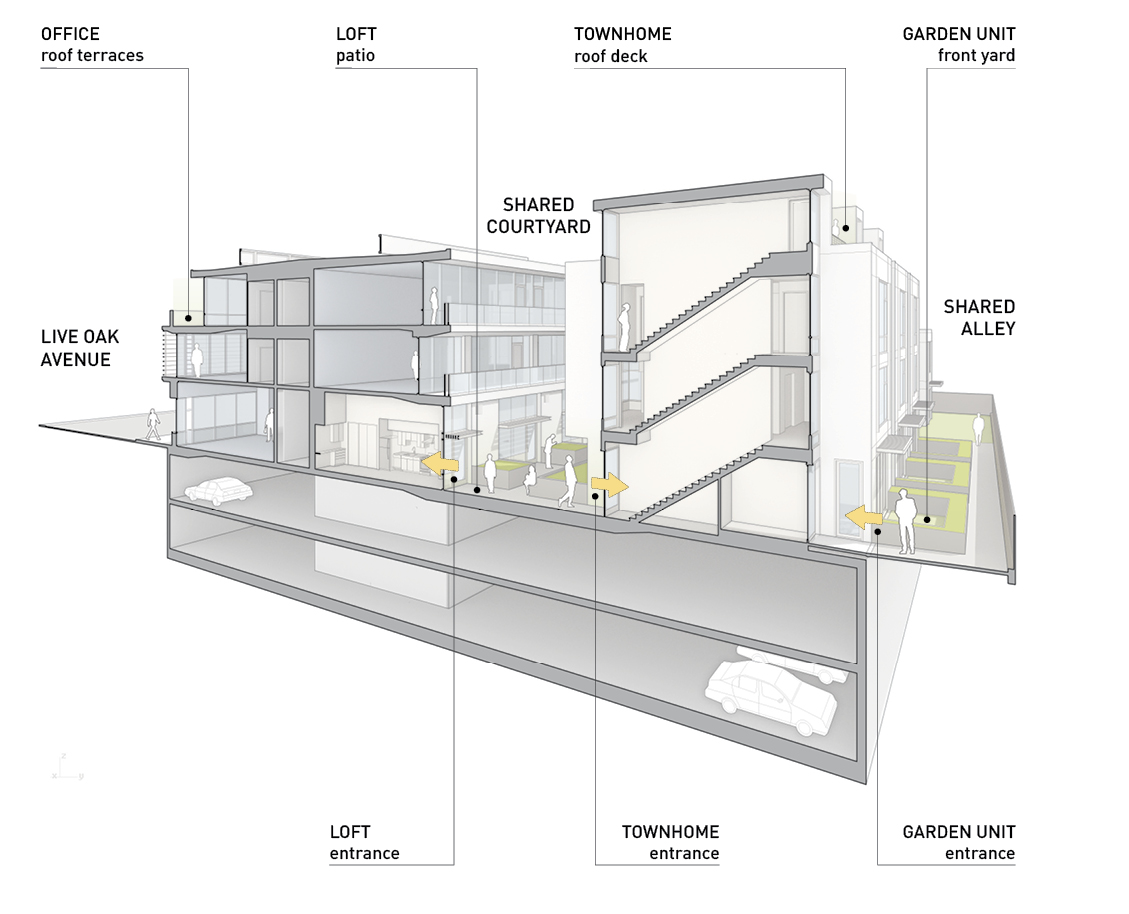 Making moves with circulation that works for everyone.

From central courtyard to shared open space, to private garden areas, there’s a simple way to connect each person’s private oasis to the community and back. 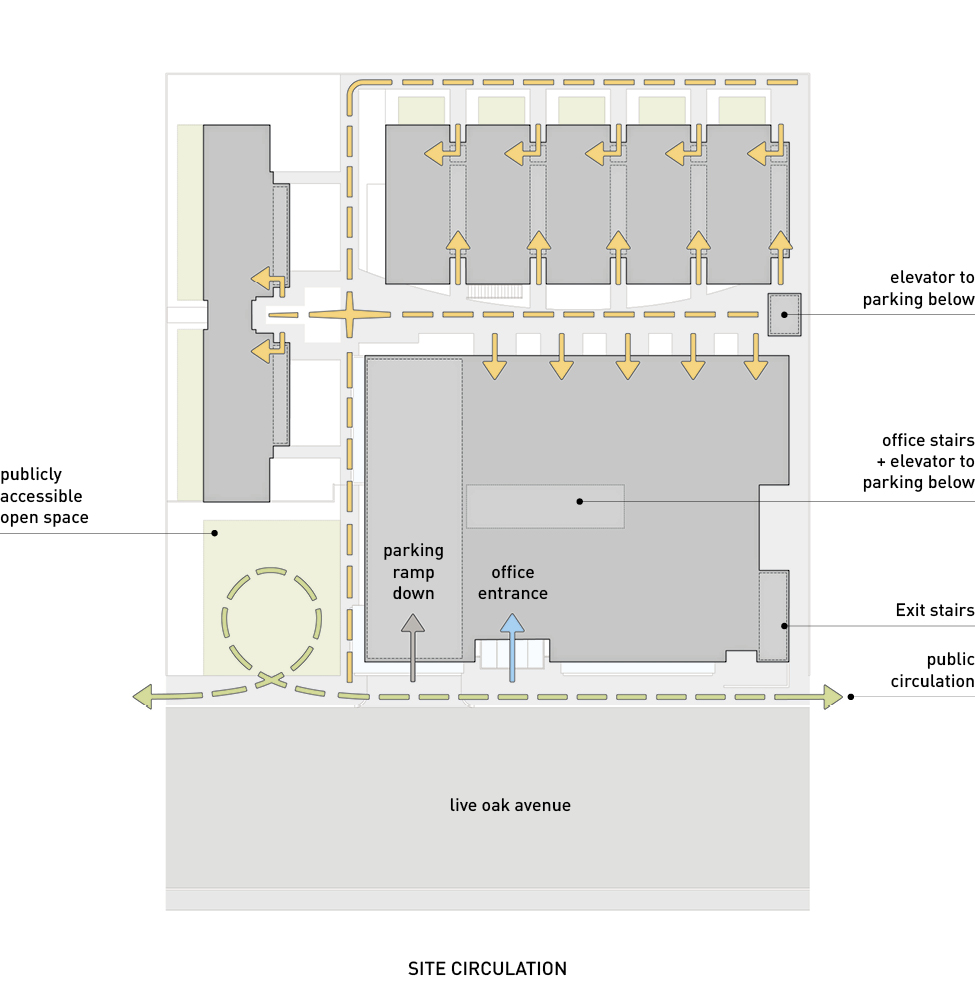 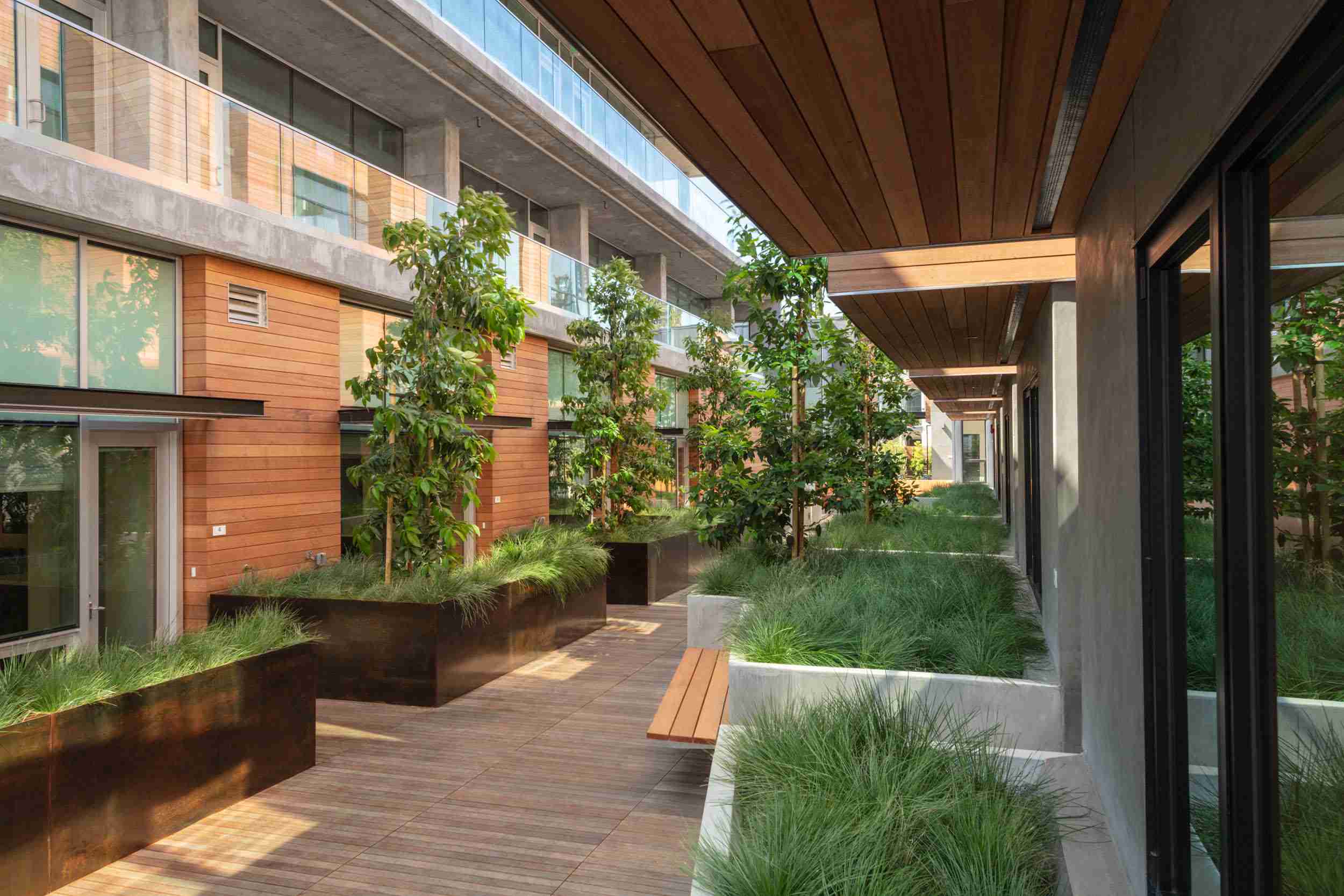 Everyone is welcome to hang out in the central courtyard, or retreat to their own roofdeck or garden.

At the same time brick was busy fitting the pieces together in 3D, we were also working to make sure each housing type would be a wonderful place to live. Tall ceilings and large windows connect neighbors to the outdoors and the courtyard. Town homes have efficient circulation that allows for living areas and kitchens on the first floor, with the bedrooms on the top floor, with an open roof deck above. Generously-sized studio and one-bedrooms make the most of every square inch of living space. Studios face the courtyard and feature exposed concrete ceilings, while one bedroom flats enjoy private patios. 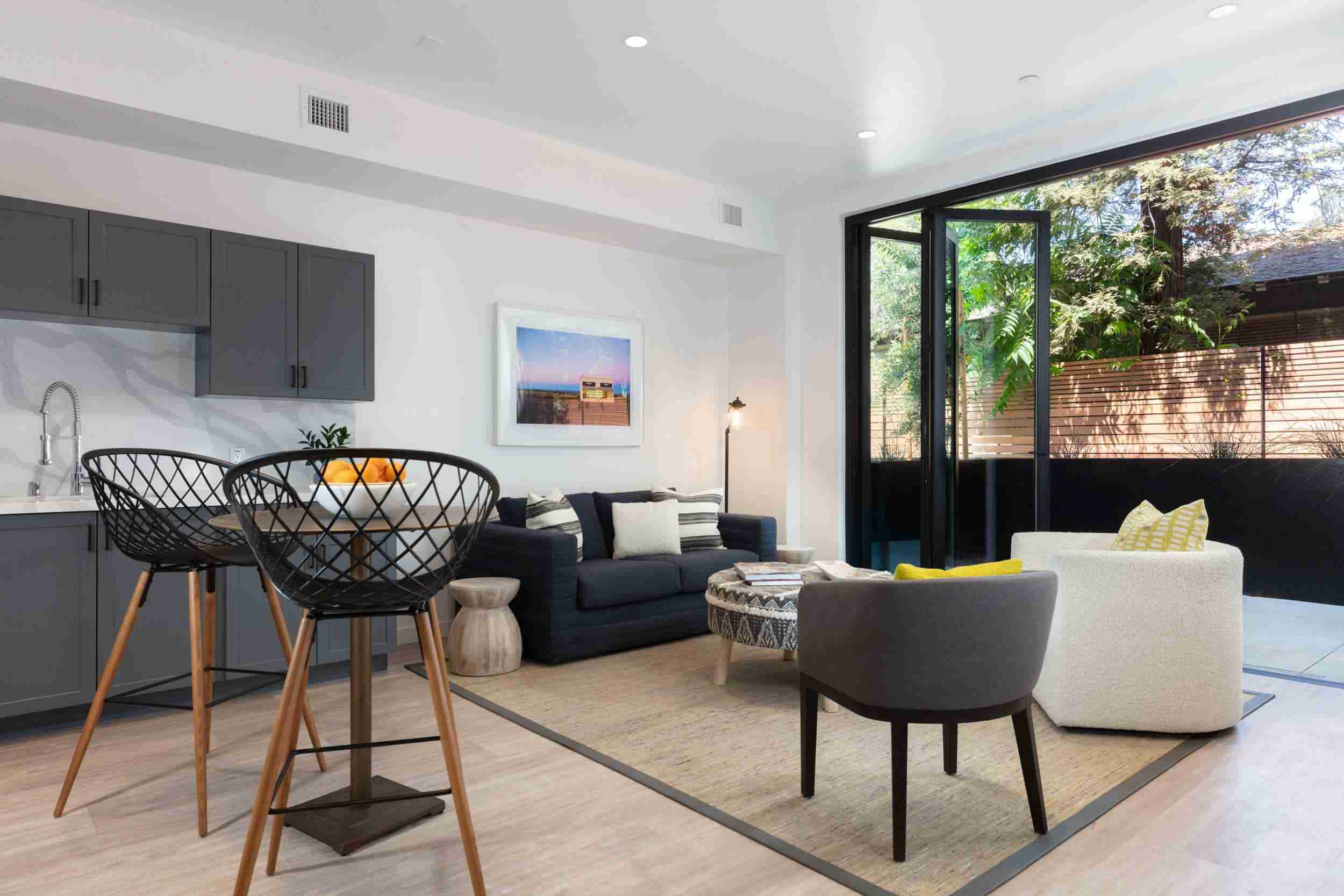 brick. CEO Rob Zirkle on when innovation is most necessary